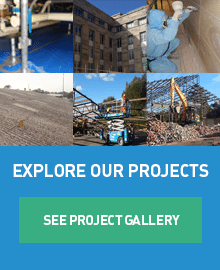 Over the 14 days allocated to the project, ASP Australia brought in 5 demolition workers with heavy machinery and plant equipment, including:

As a means to decrease the potential risks involved in the project, the client ceased all services and operations in the building prior to ASP commencing. Furthermore, all demolition work areas were cordoned off within a 10m exclusion zone, using ATF fencing and appropriate demolition signage at prescribed locations.

Due to the timing limitations imposed by local DA restrictions, ASP was required to work as adjacent loading docks continued to operate, presenting the first set of challenges that the team needed to address. The close proximity of neighbouring commercial tenants and the fact that the team was required to perform dangerous oxy-cuts at height using the 30ft Knuckle Boom added to the risks that ASP Australia ultimately managed to overcome.

It should be noted that all waste concrete extracted from the site was initially processed onsite by ASP personnel, using the 14-tonne excavator to reduce load size by pummelling large sections of concrete into more manageable, 600mm fragments. These fragments were then transported as “raw feed” to an assigned concrete recycling facility, where 100% of the waste provided would be later be re-used.

Waste steel was treated through similar methods, with ASP using oxy-torches to sheer off larger lengths of steel and making further cuts to allow for easier transportation. Once processed, the steel was then transported to a third-party steel recycling facility. 100% of the steel removed from the site was prepared and sent off for recycling.

ASP Australia completed the Watson Cold Storage Demolition project within the two-week deadline and successfully ensured the utmost safety of all on and off-site personnel through the same effective risk management strategies that the company employs in every demolition operation.

SOME OF OUR CLIENTS